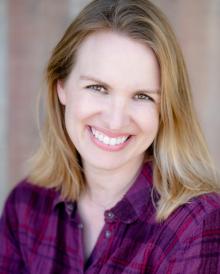 Kelli is a voice over artist and narrator with years of theater experience. She started working professionally in theater before high school graduation and carried on, majoring in theater at UCLA and spending her junior year abroad doing theater in England.. A self-proclaimed Shakespeare geek, she fled the United States again to earn her Masters in Shakespeare Studies from the Shakespeare Institute in Stratford-Upon-Avon, UK. Upon her return to the States, Kelli began teaching children’s acting along with working in theater, film, and television. Several years ago she discovered the world of voice over and audiobooks. Along with commercials, you can hear her ADR on the 'Abominable' special features, the anime series "I'm Gonna Be an Angel," as well as with dozens of audiobooks. She has a wide range of animation voices and an ear for dialects. She's been told she sucks up direction "like a sponge", which might be her favorite compliment ever.