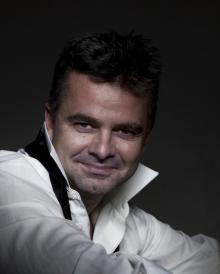 Roberto is a native Italian actor. One of the most popular voices in Italy. Very versatile talent with the ability to play different roles together and with a consolidated experience. Very flexible voice able to convey many moods, from velvety smooth and reassuring to very dynamic and energetic, from scary and menacing tones to funny and humorous colours, from elegant and clear explanations, typical of documentaries, and official deliveries, ideal for corporate communications, to passionate, personal and vibrant interpretations required by dubbing movies or acting in audiobooks. In each recording, Roberto’s voice stands out and claims the role of a protagonist. After ending the acting school in 1989 (and stopping his University studies), he moved from Bologna to Milan and started his dubbing career. He has played roles in cartoons, in movies (giving voice to famous actors such as Gary Cooper, Gary Oldman, Ron Perlman, David Carradine), voice in many reality shows (Hell’s Kitchen, Masterchef and son on) but especially in his forte: official communications. He has been the official voice of many networks such as Italia 1, Canale 5, Rete 4, Horror Channel, Cine Sony, Sky programmes and the voice of numerous commercial campaigns Tv, radio, web, being the voice of several important brands: Mercedes, Schweppes, Philips, Canon, Olympic games, Coca Cola, Mastercard just to mention a few. He also played in English either in Theatre and as Voice Talent for commercials and dubbing movies.