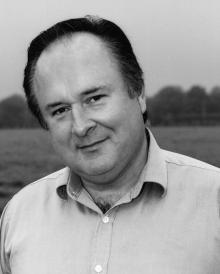 Ian set his sights on acting from the age of eight. He was lucky enough to spend two seasons with the National Youth Theatre, acting with the likes of Alex Jennings and Timothy Spall and then went on to train at the RADA, London and found Timothy Spall was there too! Who was stalking whom! After graduating and having won the Patrick Wymark Memorial Prize, he went on to act extensively in theatre around the country and abroad, his first job being with Vanessa Redgrave at The Roundhouse, London, as well as appearing on TV in recent productions by Stephen Poliakoff, John Ridley and most recently Damon Beesley in White Gold II. His voice-over career was something he ran in parallel, but it ended up with a life all of its own. Since then he has voiced thousands of radio commercials, as well as being heard on TV campaigns globally, for clients who want a voice they can trust to deliver the goods. Even spending time in Hong Kong voicing there too, though Cantonese left even him, speechless... He is known for his character work and has also appeared and PC games and animations. As well having worked in Soho on many occasions, he had one of the first ISDN, broadcast quality studios in the country, while it was current technology, so is well used to taking direction from quality clients live, around the world. Now of course, connection over the 'interweb' has taken over. Ian was lucky enough to work with George Lucas on the Star Wars: Episode One film, after having spent some time as one of the infamous Channel Four TV national announcers. He has been heard on quite a number of PC games and in animation series over the years along with many legendary stars of voice including the wonderful Peter Hawkins. As for radio drama? Ian cut his tongue with the BBC Radio Rep, so all that time spent talking people to sleep has hopefully paid off.